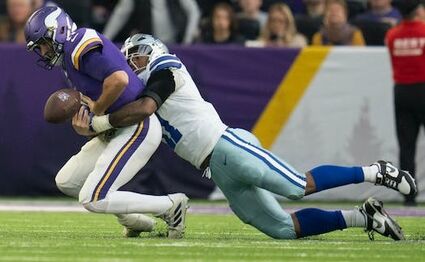 Vikings quarterback Kirk Cousins was pressured 61.5% of the time when Micah Parsons and the Cowboys used a standard four-man rush.

On Sunday, a Cowboys team that leads the NFL in sack percentage brought Kirk Cousins down seven times - the most he's been sacked in his career - while handing the Vikings the second-largest home defeat in franchise history.

On Thursday, the Vikings will try to avoid a two-game losing streak at home, while facing the Patriots, the NFL leader in quarterback pressures, without left tackle Christian Darrisaw.

Then it's a 10-day break before a third straight home game against the Jets, who rank No. 5 in total pressures despite blitzing less frequently than all but two teams in the league.