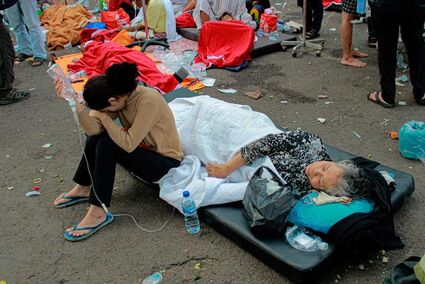 Earthquake survivors are treated outside of a hospital in Cianjur, West Java, Indonesia, Monday, Nov. 21, 2022. An earthquake shook Indonesia's main island of Java on Monday damaging dozens of buildings and sending residents into the capital's streets for safety.

CIANJUR, Indonesia - A powerful earthquake killed at least 162 people and injured hundreds on Indonesia's main island on Monday. Terrified residents fled into the street, some covered in blood and debris.

Many of the dead were public-school students who had finished their classes for the day and were taking extra lessons at Islamic schools when they collapsed, West Java Governor Ridwan Kamil said as he announced the latest death toll in the remote, rural area.

Hospitals were overwhelmed by injured people, and the toll was expected to rise further. No estimates were immediately available because of the area's far-flung, rural population, but many structures collapsed, and residents and emergency workers braced for grim news.