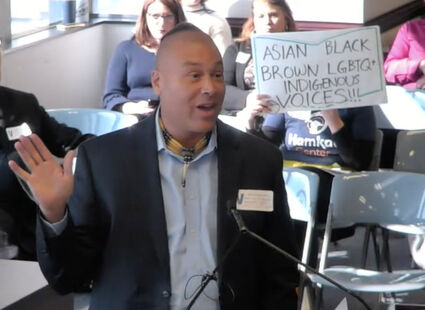 Dr. Aaron Winston, a member of the Pamunkey Tribe, was one of the community members who addressed the Virginia Board of Education on November 17. "We are not immigrants," he told board members. (Photo: YouTube)

The Virginia Department of Education is apologizing for a published draft of its history and social science standards that refers to the region's Native American ancestors as "America's first immigrants."

The proposed standards, which were submitted by Virginia Gov. Glenn Youngkin's administration late last Friday, also mandate that students learn about the "entrepreneurial characteristics" of Christopher Columbus, and instruct teachers to "facilitate open and balanced discussions on difficult topics, including discrimination and racism, and present learning opportunities without personal or political bias."