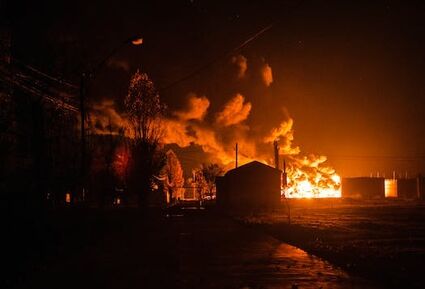 A burning oil depot that local residents said had been hit by a Russian rocket, fired from across the Dnipro River, in Kherson, Ukraine on Saturday, Nov. 19, 2022.

Rafael Mariano Grossi, the director general of the International Atomic Energy Agency, said multiple explosions near the plant - on Saturday evening and again on Sunday morning - abruptly ended a period of relative calm around the nuclear facility that has been the site of fighting between Russian and Ukrainian forces since Russia invaded on Feb. 24.