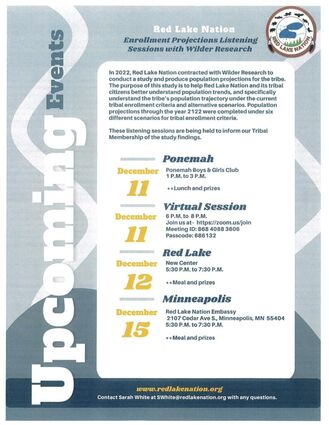 Blood Quantum is a strategy used by the U.S. government to attempt to track the amount of "Native blood" a person has (although there is no scientific or DNA basis in blood quantum) and to limit the size of tribal membership. The amount of Indian blood a person has is measured in fractions, such as ¼ or ½. This measurement can affect a person's tribal enrollment and their ability to be recognized as Native American by various state and federal programs. The blood quantum policy was first recommended by the federal government and was adopted within many tribes as they were establishing their tribal constitutions. Tribes have the authority/ability to create their own enrollment qualifications under the Indian Reorganization Act of 1934. Blood quantum is not a concept or strategy that tribes used to determine tribal membership pre-colonization.

For the study, Wilder conducted a Red Lake Nation tribal member survey that included a random sample of 3,000 Red Lake Nation tribal citizens. Overall, 377 Red Lake Nation tribal citizens completed the survey. The purpose of the survey was to learn about non-Red Lake American Indian blood among Red Lake tribal members and descendants. Wilder also worked with Red Lake Nation to obtain the 1958 base roll to be used for the projections based on lineal descent. Wilder worked with Professor Carolyn Liebler from the University of Minnesota Sociology Department and Minnesota Population Center to obtain information from publicly available sources such as the U.S. Census Bureau and the U.S. Centers for Disease Control and Prevention to establish fertility and mortality rates in order to produce reliable and valid population projections.

"Although many tribes are now grappling with declining populations as a result of their use of blood quantum to determine who can become a tribal member, only Red Lake and one or two other tribes in the nation are using this advanced approach to try and understand what is happening with tribal enrollment," said Nicole MartinRogers, Wilder Research. "We used the best data and methods we had available to provide these estimated population sizes under different enrollment scenarios. This will give tribal members and leaders the best information possible as they figure out what they want to do next."

• All tribal membership enrollment criteria scenarios using 1/4 blood quantum will result in population declines over the remainder of this century and into the next one.

• An enrollement criteria scenario using 1/8 blood quantum estimates a slight initial increase in population size, and projects that the population size will remain relatively constant through the end of this century, but will start to decline around the beginning of the next century.

• An enrollement criteria scenario allowing any lineal descendant from the 1958 Red Lake base rolls to be eligible for enrollment (eliminating the blood quantum criteria) showed a significant initial increase in population size, and projects that the population could increase to over 60,000 by early next century.

• An enrollement criteria scenario allowing any lineal descendant but using a phased approach estimates a steep population increase, but the phased approach could help Red Lake Nation's enrollment office and other tribal departments manage the influx of new members by phasing people in gradually over the next 10-15 years.

"We already knew that our Red Lake Nation tribal population is declining, like many tribes," said Samuel Strong, Tribal Secretary of the Red Lake Nation. "The study helped confirm that all of the scenarios using ¼ blood quantum as an enrollment criteria will result in a steep decline in the tribe's population down to nearly zero within the next 100 years. If we reduced the criteria to 1/8 blood quantum, our population might be maintained at about the size we're at now over the next 100 years. Lineal descent is an option we will want to explore if we want to grow our tribal membership in the coming years."

Listening sessions are planned to share what was learned in the study with Red Lake Nation tribal members, answer questions, and have some discussions about what the tribe should do with this information.

Go to the Red Lake Nation web site (https://www.redlakenation.org/) to learn more about the listening sessions and contact Sarah White at SWhite@redlakenation.org with any questions.

Wilder Research is a nationally respected independent research group at the Amherst H. Wilder Foundation. Through research and evaluation services, we help people, communities and organizations throughout Minnesota and the country measure and improve their effectiveness, identify needs and solutions, and make data-informed decisions that improve lives.