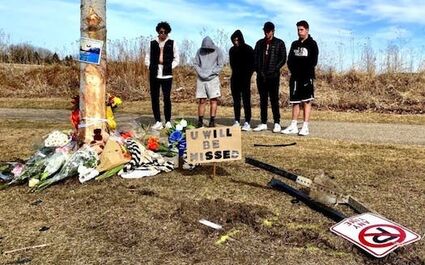 Friends of Garrett Bumgarner, who died in car crash March 13, 2021, in Woodbury, gathered at the scene of the crash on Settlers Ridge Parkway. Bumgarner was one of 497 people who died on Minnesota roads in 2021.

A Woodbury teenager has been sentenced for a driving stunt that sent his speeding car into an airborne crash that killed one of his passengers and seriously injured three other teens.

Kyle S. Hollister, 18, was sentenced on Tuesday in Washington County District Court after he pleaded guilty to criminal vehicular homicide and criminal vehicular operation in connection with the crash in Woodbury at Settlers Ridge Parkway and Sundance Way on March 13, 2021. The crash split the car in half upon impact with a tree and killed 18-year-old Garrett Bumgarner.

Hollister, who was 17 at the time of the wreck, was sentenced under what is called extended jurisdiction juvenile status, which blends an adult prison sentence within juvenile court. Under the terms, Hollister's 5¾-year adult prison term is suspended as long as he complies with all aspects of his probation, which lasts until he turns 21.