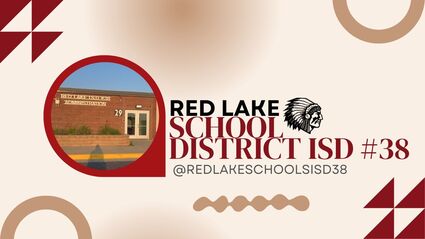 RED LAKE, MN - At the Regular School Board Meeting held on Wednesday, November 16, 2022, the Board certified the November 8, 2022 Elections where four new board members were elected to the 7-member Board of Education.

Those elected were Tina Stately, Thomas Barrett, Chris Jourdain and Nicole Desjarlait, whose terms will begin in January 2023. ( https://www.redlakenationnews.com/story/2022/11/09/news/stately-barrett-jourdain-and-desjarlait-elected-to-red-lake-school-board/110056.html )

Those at the meeting were Michael Barrett, Board Chairman, Rob McClain, Vice-Chairman, Jack Desjarlait, Director and Rob Pemberton, Director. Pemberton was appointed to act as Clerk with the absence of Barb Thomas. Treasurer Roy Nelson and Director Marcus Tyler were also absent from the meeting.

Highlight of these reports were a decrease in violent student behaviors over the last three weeks, some of which by allowing parents and tribal officials to observe and visit with students during school; replacing the 1950's steam boiler at the Secondary Complex; two new electric buses and charging infrastructure will be added to the bus fleet in early 2023; and an update on the school Website redesign and launch.

The Board approved a request from Stella Fern to retire at the end of the 2022-23 school year; call for bid for the Secondary School Boiler Upgrade Project; approved a resignation request from Alberta Spears and Francis Brun; hired Chad Wulff at a Junior High Boys' Basketball Coach; approved additions to the 2022-23 sub-list; approved History Day Club; approved RLES Archery Club; and approved submission of FY23 American Indian Education Aid application.

Bills totaling $2,637,965.88 for the month were approved, an amendment to the school calendar was approved after a brief discussion and the yearly contract with Red Lake Nation News was renewed to November 2023.

The next Regular Board Meeting is scheduled for December 21, 2022, and on January 5, 2023 new school board members will be sworn in and the Board will hold its re-organizational meeting.