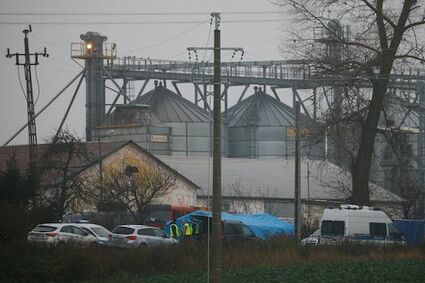 Police officers on Wednesday work outside a grain depot in Przewodow, Poland, where an explosion of a Russian-made missile killed two people.

PRZEWODOW, Poland - NATO member Poland and the head of the military alliance both said Wednesday that a missile strike in Polish farmland that killed two people appeared to be unintentional and was probably launched by air defenses in neighboring Ukraine. Russia had been bombarding Ukraine at the time in an attack that savaged its power grid.

"Ukraine's defense was launching their missiles in various directions, and it is highly probable that one of these missiles unfortunately fell on Polish territory," said Polish President Andrzej Duda. "There is nothing, absolutely nothing, to suggest that it was an intentional attack on Poland."

NATO Secretary-General Jens Stoltenberg, at a meeting of the 30-nation military alliance in Brussels, echoed the preliminary Polish findings. Ukrainian President Volodymyr Zelenskyy, however, disputed them and asked for further investigation.