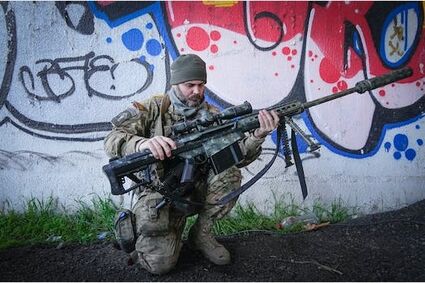 U.S. fighter Paul Smith from San Diego, who sighed a contract with the Ukrainian army and participated in the counteroffensive to liberate Kherson, takes position, on the outskirts of Kherson, Ukraine, Tuesday, Nov. 15, 2022.

KYIV, Ukraine - Poland said early Wednesday that a Russian-made missile fell in the eastern part of the country, killing two people in a blast that Ukrainian President Volodymr Zelenskyy decried as "a very significant escalation" of the war.

The exact circumstances of the fatal explosion were unclear, including who fired the missile and from where. The Polish government said it was investigating and raising its level of military preparedness. NATO planned to hold an emergency meeting to discuss the events close to the Ukrainian border. Russia denied any involvement.

Zelenskyy's comments, delivered in an evening address to the nation, came hours after a senior U.S. intelligence official told The Associated Press that Russian missiles had crossed into Polish territory and killed two people.