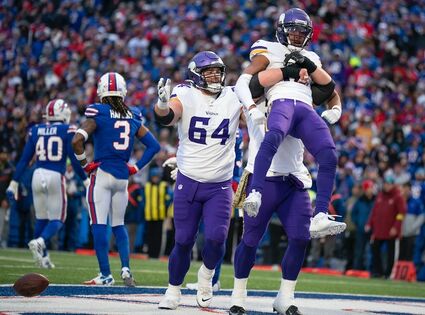 A Vikings offensive lineman lifted Minnesota Vikings wide receiver Justin Jefferson (18) up after he got the ball down to the one yard line late in the fourth quarter.

ORCHARD PARK, N.Y. - At various points in the second half of a game that defied logic, it appeared the Vikings' game against the Bills on Sunday would end with a blowout loss, then a comeback victory, then a gut-wrenching defeat, then an unfathomable victory.

At one point in overtime, as Buffalo quarterback Josh Allen tried to float a pass over a cornerback the Vikings had just added to their active roster, it seemed the Bills would be walk-off winners.

Instead, after Patrick Peterson intercepted Allen in the end zone for the second time Sunday, the Vikings left Highmark Stadium with a 33-30 overtime win against one of the AFC's pre-eminent teams.