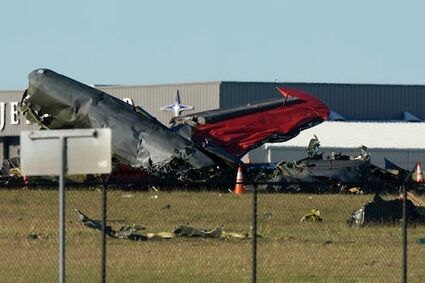 Debris from two planes that crashed during an airshow at Dallas Executive Airport lie on the ground Saturday, Nov. 12, 2022.

DALLAS - A national transportation official probing the cause of a midair crash of two historic military planes during an air show that left six people dead said Sunday one of the key questions investigators were seeking to answer is why the aircraft were seemingly sharing the same space just before impact.

A World War II-era bomber and a fighter plane collided and crashed to the ground in a ball of flames on Saturday, leaving crumpled wreckage in a grassy area inside the Dallas Executive Airport perimeter, about 10 miles (16 kilometers) from the city's downtown. Several videos posted on social media showed the fighter plane flying into the bomber.

"One of the things we would probably most likely be trying to determine is why those aircraft were co-altitude in the same air space at the same time," Michael Graham, a member of the National Transportation Safety Board, said at a news conference Sunday.