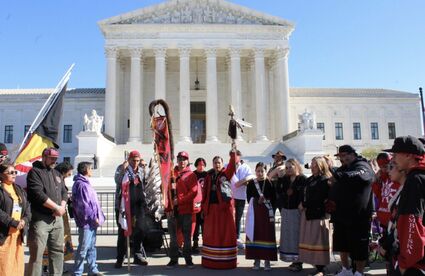 Members of the American Indian Movement rallied at the steps of the Supreme Court of the United States during Haaland v. Brackeen on Wednesday, November 9, 2022. (Photo by Darren Thompson.

WASHINGTON - In a case that tribal leaders across Indian Country view as the most significant threat to tribal sovereignty in modern times, the Supreme Court of the United States heard oral arguments for Haaland v. Brackeen. The highly contested case out of Texas challenges the constitutionality of the Indian Child Welfare Act (ICWA).

Congress passed ICWA in 1978 after a national effort to address the widespread practice of removing American Indian children-members of federally recognized tribes-from their homes and placing them with non-Native, white families.

Under a brilliant blue sky outside the U.S. Supreme Court, the highest court in the nation, four tribal nations, and their legal teams presented a united front after Wednesday's hearing, including the Cherokee Nation of Oklahoma, the Oneida Nation of Wisconsin, the Morongo Band of Mission Indians, and the Quinault Indian Nation.