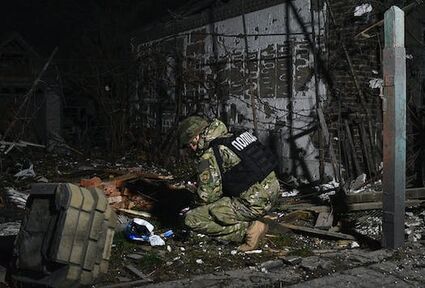 A Ukrainian police investigator worked at the site of the recent Russian shelling in Kramatorsk, Ukraine, Tuesday, Nov. 8, 2022.

KYIV, Ukraine - Russia's military said Wednesday it will withdraw from the only Ukrainian regional capital it captured, but Kyiv was skeptical and an analyst warned this could be a ruse to lure the country's forces into a deadly trap. A forced pullout from the city of Kherson would mark one of Russia's worst setbacks in the 8-month-old war.

Ukrainian authorities cautioned against considering the announced plan to retreat from Kherson, a gateway to the Russian-occupied Crimean Peninsula, and nearby areas as a done deal. President Volodymyr Zelenskyy has warned that the Russians were feigning a pullout from Kherson to lure the Ukrainian army into an entrenched battle in the strategic industrial port city.

If confirmed, the withdrawal from Kherson - in a region of the same name that Moscow illegally annexed in September - would pile on another setback to Russia's early failed attempt to capture the capital, Kyiv, and the chaotic and hasty retreat from the administrative region around Ukraine's second-largest city, Kharkiv, which itself never fell to the Russians. Russian forces captured Kherson early in the invasion, which began Feb. 24.