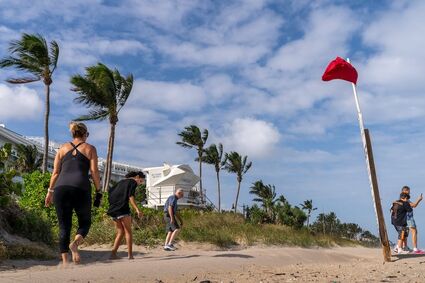 A red flag, signaling high surf and strong currents, flies in strong wind on the beach in Palm Beach, Fla., Tuesday, Nov. 8, 2022, as Tropical Storm Nicole continues to increase in strength and is expected to make landfall along Florida's east coast early Thursday.

It's a rare November hurricane for storm-weary Florida, where only two such hurricanes have made landfall since recordkeeping began in 1853 - the 1935 Yankee Hurricane and Hurricane Kate in 1985.

Nicole was expected to reach Florida on Wednesday night and unleash a storm surge that could further erode many beaches hit by Hurricane Ian in September before heading into Georgia and the Carolinas later Thursday and Friday. It was expected to dump heavy rain across the region.