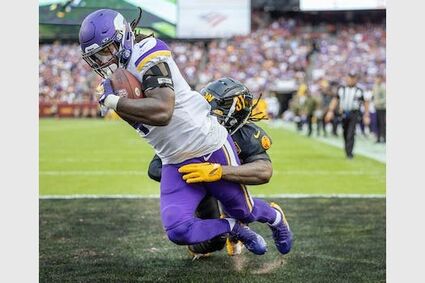 Minnesota Vikings running back Dalvin Cook (4) makes a one-handed grab in the back of the end zone for a touchdown defended by Washington Commanders safety Kamren Curl (31) in the fourth quarter.

LANDOVER, MD. - The Vikings were down 10 points with 14:14 to go, and the fans who'd once used Kirk Cousins' three-word catchphrase as a rallying cry had repurposed it as a taunt.

After the Commanders went up 17-7 on Dax Milne's 6-yard touchdown catch, the Washington fans at FedEx Field alternated between chanting "You like that!" - Cousins' famous exclamation after a 2015 comeback victory - and yelling the name of Taylor Heinicke, the former Vikings quarterback who'd become one of Cousins' successors in Washington and was now on the verge of beating him.

The crowd was still yelling on a third-and-7 on the next series, when Cousins took a shotgun snap with Daron Payne bearing down on him and fired downfield toward Justin Jefferson as Payne hit him in the midsection. Cousins laid on the grass to rest, assuming Jefferson had scored. By the time he realized former Gopher Benjamin St-Juste had tackled Jefferson at the 12 after a 47-yard gain, the Vikings' medical staff had rushed out to check on Cousins.