Biden implores voters to save democracy from lies, violence 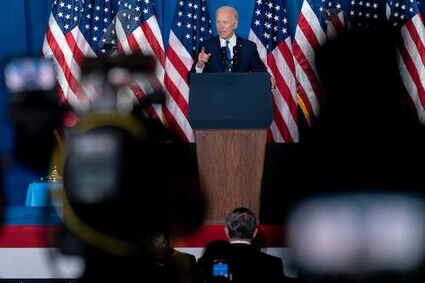 President Joe Biden speaks about threats to democracy ahead of next week's midterm elections, Wednesday in Washington.

WASHINGTON - After weeks of reassuring talk about America's economy and inflation, President Joe Biden turned Wednesday night to a darker, more urgent message, warning in the final days of midterm election voting that democracy itself is under threat from former President Donald Trump's election-denying lies and the violence he said they inspire.

Pointing in particular to the attack on House Speaker Nancy Pelosi's husband, he said that Trump's false claims about a stolen election have "fueled the dangerous rise of political violence and voter intimidation over the past two years."

Six days before major midterm elections, Biden said, "As I stand here today, there are candidates running for every level of office in America, for governor, for Congress, for attorney general, for secretary of state, who won't commit to accepting the results of the elections they're in."