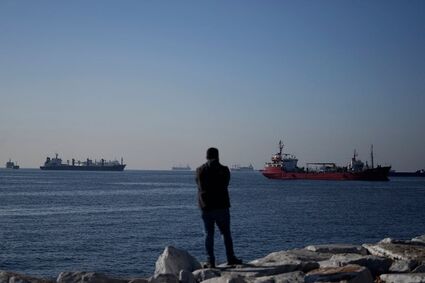 Cargo ships anchored in the Marmara Sea await to cross the Bosphorus Straits in Istanbul, Turkey, Tuesday, Nov. 1, 2022. Turkey's defense minister urged Russia to "reconsider" its decision to suspend the implementation of the U.N. and Turkish-brokered grain deal in a telephone call Monday with his Russian counterpart, Sergei Shoigu.

KYIV, Ukraine - Russia agreed Wednesday to rejoin a wartime agreement that allows Ukrainian grain and other commodities to be shipped to world markets. The U.N.'s refugee chief, meanwhile, put the number of Ukrainians driven from their homes since the Russian invasion eight months ago at around 14 million.

It is "the fastest, largest displacement witnessed in decades," said Filippo Grandi, who heads the United Nations High Commissioner for Refugees.

In announcing that Russia would rejoin the grain pact, President Vladimir Putin said Moscow had received assurances that Ukraine would not use the humanitarian corridors to attack Russian forces. He warned that Russia reserves the right to withdraw again if Kyiv breaks its word.