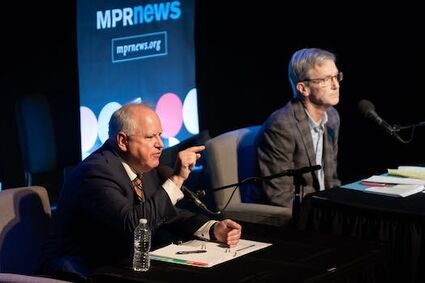 DFL Gov. Tim Walz and GOP challenger Scott Jensen faced off in their final debate on Oct. 28 in St. Paul.

Cash is pouring into Minnesota races for statewide office and critical legislative battlegrounds, as candidates near the final days of an election season that will decide control of state government.

Minnesota candidates - and the outside groups that back or attack them - submitted their final pre-election campaign finance reports, offering a last look at the tens of millions of dollars flowing into races ahead of Election Day on Nov. 8.

Candidate fundraising reports showed Republican gubernatorial hopeful Scott Jensen netted slightly more cash that DFL Gov. Tim Walz over the past month, while Walz's overall fundraising and spending far outweighed other candidates in that race. So far this year, Walz reported spending $8.3 million while Jensen was at slightly more than half that.