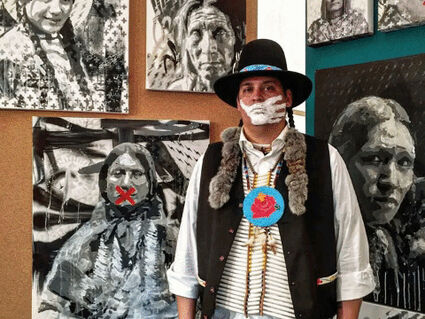 In "Merciless Indian Savages", Deal works to unveil political processes that detrimentally impact Native peoples, fights for a more inclusive future, and explores the question, "What does American Democracy mean to someone who was insulted in its founding document?" By collecting works that confront the painful past, and using the words of Thomas Jefferson as his exhibit title, Deal explores how Indigenous peoples stay true to themselves while being part of a culture which has historically stereotyped and marginalized them.

"We are so incredibly grateful for the opportunity to host "Merciless Indian Savages" and display the work of Gregg Deal at El Pueblo," said Dianne Archuleta, Director of El Pueblo History Museum. "Deal's work is a powerful opportunity for visitors to engage with an inspiring display that challenges stereotypes and honors Indigenous perspectives."

There will be an opening reception for "Merciless Indian Savages" during the 2022 Indigenous Film Festival El Pueblo History Museum on Nov. 13, 12-4 p.m., featuring two documentary screenings. Little by Little: Becoming Sister Cities tells the story of the Northern Arapaho Tribe and the City of Longmont forging the first ever sister cities relationship in the United States and Bring Her Home, which follows three Indigenous women as they fight to vindicate and honor their missing and murdered relatives. A panel discussion on the Missing and Murdered Indigenous Relatives crisis will follow the films, featuring moderator Danielle SeeWalker (Hunkpapa Lakota), Gina Lopez (Ute Mountain Ute), Monycka Snowbird (Anishinaabe) and Raven Payment (Kanien'kehá:ka/Anishinaabe).

"These two events present a chance for us to broaden our ways of thinking while also acknowledging the presence, and persistence, of the Indigenous peoples who continue to call Colorado home," Archuleta said.

The opening reception for "Merciless Indian Savages" and the 2022 Indigenous Film Festival are both free to the public, and doors to the museum will open at 11:00 a.m.

Gregg Deal (Pyramid Lake Paiute Tribe) is a contemporary artist who challenges Western perceptions of Indigenous people, touching on issues of race, history and stereotypes. He was Native Arts Artist-in-Residence at Denver Art Museum in 2015-2016 and Artist-In-Residence at UC Berkeley 2017-2018. Gregg has lectured widely at prominent educational institutions and museums, including Denver Art Museum, Dartmouth College Columbia University, and the Smithsonian National Museum of the American Indian. His television appearances include PBS's The Art District, The Daily Show and Totally Biased with Kamau Bell.

History Colorado's El Pueblo History Museum is located at 301 N. Union Avenue in the heart of the city of Pueblo, part of the Historic Arkansas Riverwalk District and the Pueblo Creative Corridor. The museum stands on the site of the original El Pueblo trading post, constructed in 1842. The museum site features beautiful galleries, a gift shop, bookstore, gardens, an active archaeological dig, and a recreation of the 1842 adobe trading post. Current exhibits include Borderlands of Southern Colorado, Steel City: 1980-2004, and You Should've Seen It: Pueblo's Mineral Palace.

History Colorado is a division of the Colorado Department of Higher Education and a 501(c)3 non-profit that has served more than 75,000 students and 500,000 people in Colorado each year. It is a 143-year-old institution that operates eleven museums and historic sites, a free public research center, the Office of Archaeology and Historic Preservation, and the History Colorado State Historical Fund (SHF), which is the nation's largest preservation program of its kind. More than 70% of SHF grants are allocated in rural areas of the state.

History Colorado's mission is to create a better future for Colorado by inspiring wonder in our past. We serve as the state's memory, preserving and sharing the places, stories, and material culture of Colorado through educational programs, historic preservation grants, collecting, outreach to Colorado communities, the History Colorado Center and Stephen H. Hart Research Center in Denver, and ten other museums and historic attractions statewide. History Colorado is one of only six Smithsonian Affiliates in Colorado. Visit HistoryColorado.org, or call 303-HISTORY, for more information.