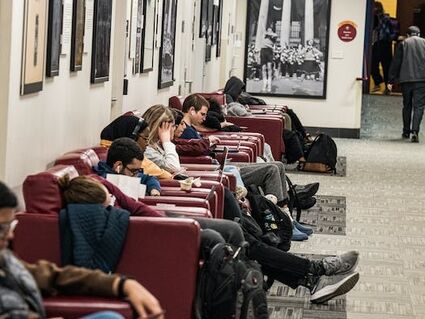 Students gathered at Coffman Union on the University of Minnesota campus on Monday, Oct. 31.

College students and administrators across Minnesota pledged Monday to uphold their commitments to fostering diversity on campus, no matter how the U.S. Supreme Court rules in two cases challenging affirmative action.

Higher education leaders stood by the "holistic" approaches they apply to admissions now, and several private colleges in the state have signed on to amicus briefs that urge the court to allow them to keep using race as one of many factors in evaluating potential students.

Macalester, Carleton and St. Olaf colleges joined a brief submitted by relatively small and selective private schools that said they have "repeatedly concluded that race cannot be excluded entirely from admissions considerations if they are to enroll the diverse classes critical to their educational mission." The University of St. Thomas and St. Catherine University signed a similar, separate brief filed by several Catholic colleges nationwide.