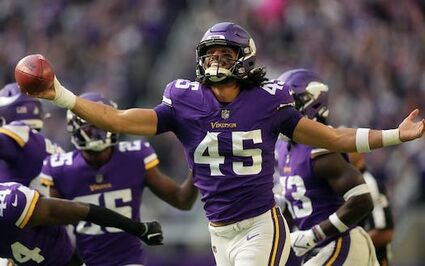 For the sixth time in his seven games as Vikings head coach, Kevin O'Connell addressed a victorious locker room on Sunday, his voice swelling as he told players about his confidence they would pull out another close game, and rising again as he called them an "ascending team" that might someday win more comfortably.

O'Connell handed game balls to Jordan Hicks, the former Cardinals linebacker who'd come up with a key fourth-down stop in the Vikings' 34-26 win over Arizona, and to Patrick Peterson, the eight-time Pro Bowler for the Cardinals whose three pass breakups gave him the chance to shout rejoinders at the team he felt had cast him aside two years ago.

The coach had another game ball, he said, for Za'Darius Smith, whose three sacks of Kyler Murray gave him 8½ in his first seven games with the Vikings after the Packers let him go.