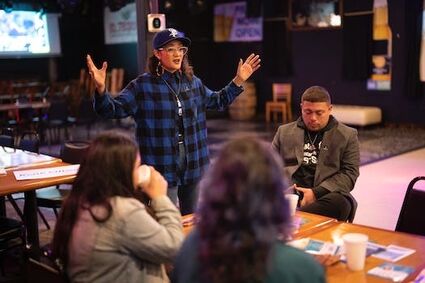 María Isa Pérez-Hedges, a DFL candidate for the Minnesota House, spoke during a Get out the Vote event put on by Movimiento in October at El Tequila Bar in Columbia Heights.

Minnesota candidates are taking their pitches to the pulpits in Black parishes, translating campaign material into Spanish, Somali and Hmong and courting voters from Minneapolis to Worthington who often don't hear from either political party.

In the final weeks of the campaign, Minnesota Democrats in particular are increasing their intensity to turn out voters of color amid concerns that a drop in turnout or a shift toward Republicans could hurt their chances up and down the ticket.

For the party - which has long counted on support from voters of color - the turnout by those voters on Nov. 8 could make the difference in close statewide races and crucial legislative battlegrounds.