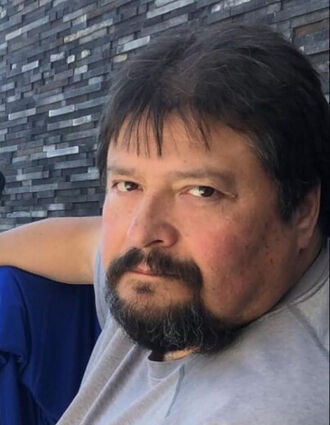 Dale Roderrick Bohn, "Me me guey se" meaning "Little People", of the Bullhead Clan and of Cass Lake, MN journeyed to the spirit world on Thursday, October 27, 2022, from Sanford Medical Center in Bemidji, MN. He was born March 24, 1968, in Big Fork, MN, the son of Mary Lou (Hardy) and Peter Bohn.

Dale graduated from Mentor High School in 1986. He moved to Grand Forks, ND, and worked at Ryan Potato until the flood of 1998, when he moved to the Cass Lake area and started working at Leech Lake Gaming. He worked at Cedar Lakes Casino from 1998 until November 2020 when health issues forced him to slow down. He met the love of his life on New Year's Eve of 1999. Dale and Shelly were later married in Turtle Rive on March 24, 2002. Dale loved riding his motorcycle, watching the MN Vikings, and Yellowstone. He was a self-taught guitar player, who enjoyed listening to and playing country music. Dale loved all the children, they were his pride and joy, he was just a big kid himself. His family was his everything. He especially loved watching his nephew play basketball and was so proud of him playing college basketball. If a baby was brought into a room with him, everything stopped, and the baby was given the attention in the room. He was ecstatic with his "new to him" Chevy Truck. He was known for raising hell and joking with everyone. He drew funny Caricatures drawings; they were most likely inappropriately hilarious. He grew up hunting, camping, and fishing. He enjoyed helping his wife, Shelly, and Dawn work in the garden and do yard work. He was not a shy guy and never needed anyone's approval. He liked sitting outside and being outside in general. Dale's love and sense of humor will be greatly missed by all who were fortunate enough to know him.

Dale's care has been entrusted to Northern Peace Funeral Home of Walker, MN. Online condolences for the family may be left at http://www.northernpeace.com