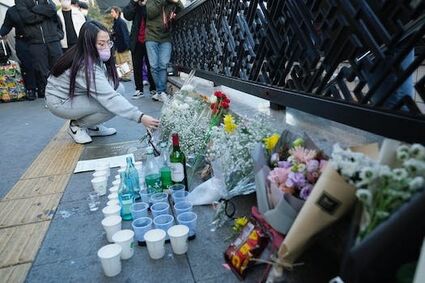 A woman places a bouquet of flowers to pay tribute for victims near the scene of a deadly accident in Seoul, South Korea, Sunday, Oct. 30, 2022.

SEOUL, South Korea - South Koreans mourned and searched for relatives lost in the "hell-like" chaos that killed more than 150 people, mostly young adults, when a huge Halloween party crowd surged into a narrow alley in a nightlife district in Seoul.

It remained unclear what led the crowd to surge into the downhill alley in the Itaewon area on Saturday night, and authorities promised a thorough investigation. Witnesses said people fell on each other "like dominoes," and some victims were bleeding from their noses and mouths while being given CPR.

Kim Mi Sung, an official at a nonprofit organization that promotes tourism in Itaewon, said she performed CPR on 10 people who were unconscious, mostly women wearing witch outfits and other Halloween costumes. Nine of them were declared dead on the spot.