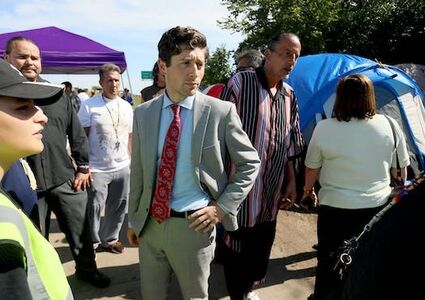 Minneapolis Mayor Jacob Frey visited a homeless encampment near the LIttle Earth housing project in 2018. Protesters who are angry about what they call the city's "militarized" response to homelessness on Sunday set up their own encampment Sunday outside Frey's home.

Angry at what they called the "militarized" response to homelessness by the city of Minneapolis, protesters set up a sidewalk encampment Sunday outside the home of Mayor Jacob Frey on East Hennepin Avenue.

"I think we can all agree that we don't want to see camps on our streets, in our parks," said Young Eagle, a protester who identified as a member of the Ho-Chunk Nation. "But we're seeing a militarized response.