Russia's Putin says he won't use nuclear weapons in Ukraine 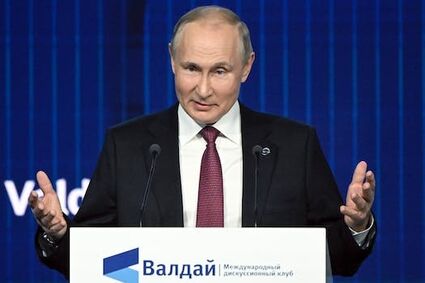 Russian President Vladimir Putin gestures as he speaks at the plenary session of the 19th annual meeting of the Valdai International Discussion Club outside Moscow, Russia, Thursday, Oct. 27, 2022.

MOSCOW - Russian President Vladimir Putin on Thursday denied having any intentions of using nuclear weapons in Ukraine but described the conflict there as part of alleged efforts by the West to secure its global domination, which he insisted are doomed to fail.

Speaking at a conference of international foreign policy experts, Putin said it's pointless for Russia to strike Ukraine with nuclear weapons.

"We see no need for that," Putin said. "There is no point in that, neither political, nor military."