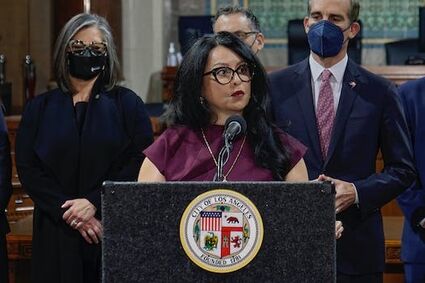 LOS ANGELES - The Los Angeles City Council formally rebuked two members and its former president Wednesday for their involvement in a racism scandal that has led to days of protests, police and state investigations and shaken public faith in City Hall.

The 12-0 vote to censure former council President Nury Martinez and Councilmen Gil Cedillo and Kevin de León represented the strongest step the council can take to publicly reprimand them for their participation in a secretly recorded 2021 meeting laced with crude, bigoted comments, in which the Latino Democrats schemed to protect their political clout in the redrawing of council districts at the expense of Blacks and renters.

The council cannot expel members - it can only suspend a member when criminal charges are pending. While a censure is largely symbolic, it adds new weight to the pressure coming from across the political spectrum for Cedillo and de León to resign.