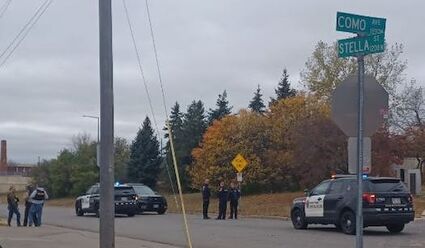 The scene where a teenage homicide suspect was arrested Tuesday in St. Paul.

Roseville police said Wednesday that a 17-year-old boy killed his 88-year-old grandmother at the family's home.

The teenager, whose identity has yet to be released and who remains in juvenile custody awaiting charges, used "sharp and blunt force" to kill Patricia F. Maslow at a home in the 1100 block of Ryan Avenue W. late Tuesday morning, according to a police statement. Emergency responders declared her dead at the scene.

Police also said that the teen injured other family members at the home during the tirade, including his 55-year-old mother, who remains hospitalized with blunt-force trauma. The mother is Maslow's daughter.