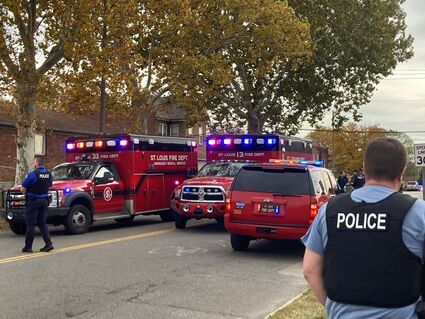 A view shows vehicles of the St. Louis Fire Department following a shooting at a high school, in St. Louis, United States, October 24, 2022, in this still image. Courtesy of Holly Edgell/NPR Midwest Newsroom/ via REUTERS

Oct 25 (Reuters) - The teenage gunman who killed a student and a teacher at a St. Louis high school left a note in his car saying his feelings of loneliness were "a perfect storm for a mass shooting," the city's police commissioner said on Tuesday.

Police found a blue notebook in the car that the killer, Orlando Deshawn Harris, drove on Monday to the Central Visual and Performing Arts High School, where he fatally shot the 61-year-old teacher and 16-year-old female student, while wounding or causing injuries to seven other people.

Harris was killed in an exchange of gunfire with police.