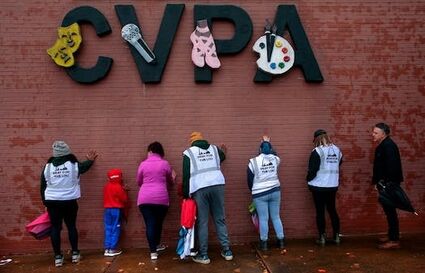 A group of visitors from the group "Pray for the Lou" place hands on the building during prayers at the site of a school shooting at Central Visual & Performing Arts High School in St. Louis, Tuesday, Oct. 25, 2022 in St. Louis.

ST. LOUIS - A 19-year-old who killed a teacher and a 15-year-old girl at a St. Louis high school was armed with an AR-15-style rifle and what appeared to be more than 600 rounds of ammunition, a police official said Tuesday.

Sack read Harris' note in which the young man lamented that he had no friends, no family, no girlfriend and a life of isolation. Harris called it the "perfect storm for a mass shooter."