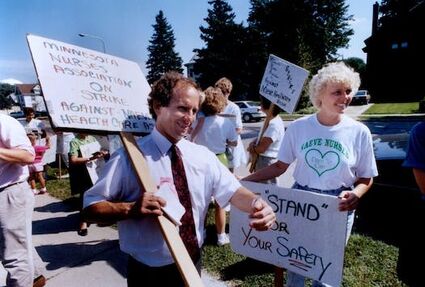 In this photo taken during his first campaign for Senate, Paul Wellstone greeted striking nurses outside Naeve Hospital during a stop in Albert Lea on Sept. 3, 1990.

Democrats Amy Klobuchar and Tina Smith are behind the push to honor Wellstone, with Tuesday marking the 20th anniversary of his death in a plane crash near Eveleth 11 days before the 2002 Senate election.

Wellstone, who was 58 and running for a third term when he died, remains deeply influential in DFL politics. Klobuchar called him a mentor and a friend in an interview. While some local places have been named after Wellstone, Klobuchar said the federal government should also take this latest step to "acknowledge his service."