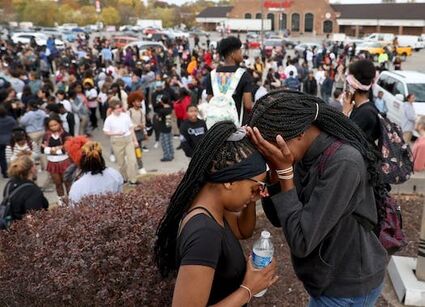 High School students were evacuated to the Schunks parking lot from the Central Visual & Performing Arts High School after a reported shooting at the school in in south St. Louis on Monday, Oct. 24, 2022.

ST. LOUIS - An armed former student broke into a St. Louis high school Monday morning warning, "You are all going to die!" before fatally shooting a teacher and a teenage girl, and wounding seven others before police killed him in an exchange of gunfire.

The attack just after 9 a.m. at Central Visual and Performing Arts High School forced students to barricade doors and huddle in classroom corners, jump from windows and run out of the building to seek safety. One terrorized girl said she was eye-to-eye with the shooter before his gun apparently jammed and she was able to run out.