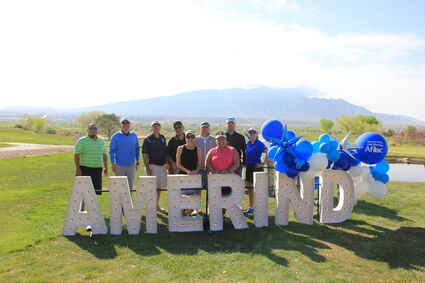 AMERIND, the nation's only 100 percent tribally owned insurance company, created the AMERIND Protecting Tribal Families Fund to help uninsured tribal homeowners rebuild or repair after a fire, flood, or other catastrophic event. The tournament has raised more than $200,000 for numerous families and invited beneficiaries in Indian Country since its inception. "AMERIND is proud of our continued commitment to give back to Indian Country through this fundraiser," said Robert Dahl, AMERIND's Acting CEO.

The golf fundraiser will also benefit the National Indian Council on Aging (NICOA), a New Mexico-based nonprofit that works to advocate for improved comprehensive health, social services, and economic wellbeing for American Indian and Alaska Native elders. "The National Indian Council on Aging is the only Native American organization that advocates and educates on the needs of our elders. These elders are living encyclopedias on the history, culture, and language of Indian people. This tournament allows NICOA to continue to ensure the continued existence of Indian tribes in this country," said Larry Curley, NICOA Executive Director.

The event was held at the highly ranked Golf Week and Golf Digest Santa Ana Golf Club. The tournament winners were:

AMERIND creates affordable, sustainable insurance products and services for Indian Country. Founded in 1986, it is the only 100 percent Tribally owned and operated insurance company and has earned the A- (Excellent) rating from AM Best. Giving back to Indian Tribes is one of AMERIND's top priorities. More information is available on the website at AMERIND.com.