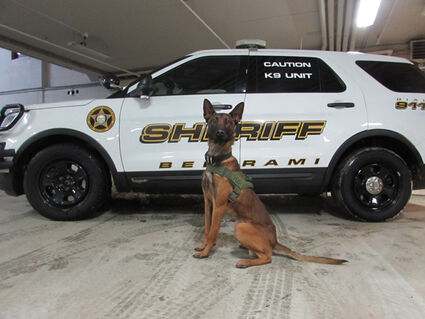 Deputies pursued the vehicle for approximately 22.5 miles through western Beltrami County and into southern Clearwater County with speeds averaging in excess of 100 miles per hour. The vehicle lost control on a sharp s-curve on 243rd Ave, a gravel road in Clearwater County. The suspect vehicle left the roadway crashing into the woods and became hung up on a tree after approximately 200 feet.

The driver of the vehicle was given multiple commands to exit the vehicle. The suspect fled on foot into a heavily wooded swampy area. Additional deputies from Beltrami, Hubbard and Clearwater Counties arrived and established a perimeter. Multiple warnings of K9 deployment were given. The suspect was given ample time to surrender but chose to ignore the warnings.

Beltrami County K9 "Rip" was deployed by his K9 Handler Deputy Hanson and successfully tracked the suspect for 300 yards through heavy brush and swamp. K9 Rip located a male hiding under a small tree and apprehended him until deputies could take the suspect into custody. Dustin Lewis Anderson, age 33 of Bagley, was arrested and transported to Sanford Health for treatment for injuries sustained during the K9 apprehension.