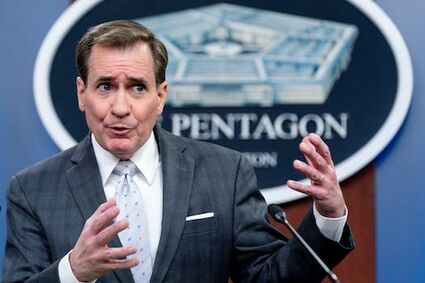 Pentagon spokesperson John Kirby speaks during a briefing at the Pentagon in Washington, Wednesday, Feb. 2, 2022.

WASHINGTON - The White House said Thursday that Iranian troops are "directly engaged on the ground" in Crimea supporting Russian drone attacks on Ukraine's power stations and other key infrastructure, troubling evidence of Tehran's deepening role assisting Russia as it exacts suffering on Ukrainian civilians just as the cold weather sets in.

National Security Council spokesman John Kirby told reporters that Iran has sent a "relatively small number" of personnel to Crimea, a part of Ukraine unilaterally annexed by Russia in contravention of international law in 2014, to assist Russian troops in launching Iranian-made drones against Ukraine. Members of a branch of the Iranian Revolutionary Guard Corps were dispatched to assist Russian forces in using the drones, according to the British government.

The revelation of the U.S. intelligence finding comes as the Biden administration seeks to mount international pressure on Tehran to pull back from helping Russia as it bombards soft Ukrainian civilian targets with the help of Iranian-made drones.