Minneapolis to pay more than $700,000 to settle excessive force claims by demonstrators 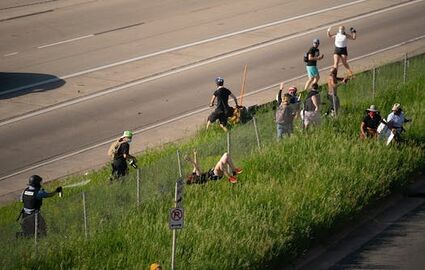 Police tried to clear the freeway of protesters during the unrest following George Floyd's death at the hands of police in May 2020.

The Minneapolis City Council approved four separate settlements Thursday totaling more than $700,000 to resolve claims of unreasonable and excessive force by police in response to demonstrations following the deaths of George Floyd and Winston Smith.

The largest award was issued to a group of 11 Minnesotans and one former Iowa resident who filed a class-action lawsuit in federal court accusing the Minneapolis Police Department of targeting them with tear gas, rubber bullets and pepper spray as they peacefully protested in the immediate aftermath of Floyd's murder.

Most of the plaintiffs were marching along the Interstate 35W bridge on May 31, 2020, when an oil tanker barreled toward the large crowd at high speed, forcing protesters to scatter in every direction. When MPD and other law enforcement arrived, they did not seek to discover whether anyone was injured, the suit alleges, instead focusing on the safety of the truck driver.