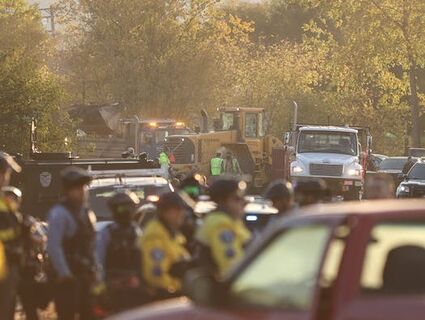 Minneapolis police taped off several blocks surrounding the Near North homeless encampment Oct. 6, as an estimated 30 people were evicted from tents and semipermanent structures.

An effort to temporarily halt the closing of homeless encampments across Minneapolis failed Thursday after City Council members were told they don't have the authority to do so.

City attorneys told council members pushing for the moratorium on city staff closing the camps that the workers are following the city's laws. If the council wants to stop them - change or rescind the law. Their opinion reflects the consequences of a new government structure concentrating executive power in the hands of the mayor.

Council Member Aisha Chughtai proposed that the city temporarily pause forced removals of homeless encampments until April in order to analyze the health and fiscal impacts of all closures the past five years, such as spread of HIV/AIDS and overtime costs associated with the large police presence that has typified recent actions.