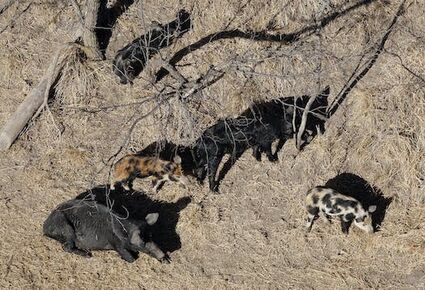 Brenda Baldwin says she worried for the safety of her 100-pound Rottweiler, Dutch, as he stared face-to-face with the boar that had emerged from the woods along the Blue Earth River.

"I mean Dutch is tough, but that hog was probably 200 pounds or so," Baldwin, a landowner south of Blue Earth, Minn., told the Star Tribune about her encounter with a wild pig in late September. "I managed to keep my composure enough to snap some pictures to say, 'Yes, these things do exist.'"

A couple days later, officers with the Department of Natural Resources arrived to her property and shot three adult and one juvenile Mangalitsa hogs. The unusual-looking hogs had escaped a sale barn this summer. But Baldwin thinks six of the animals - five piglets and an adult - are still on the loose.