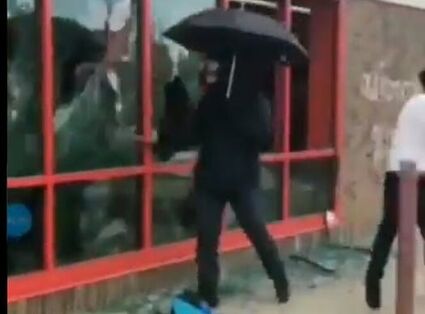 A photo from a video shows a man with an umbrella and gas mask breaking windows at the AutoZone on Lake Street in Minneapolis during riots after George Floyd's death.

The FBI is seeking the public's help in identifying the so-called "Umbrella Man" seen in a viral video breaking windows at a south Minneapolis AutoZone store before later vandalizing the city police department's Third Precinct building during the 2020 unrest that followed George Floyd's killing.

The bureau's Minneapolis division issued an alert on Tuesday asking for help identifying the man, whom the FBI dubbed a "person of interest." The white male was seen carrying a black, opened umbrella - earning the "Umbrella Man" moniker on social media - as he broke windows at the auto parts store on Lake Street and later damaged the Third Precinct building that eventually burned.

The FBI shared photos of the man, who also wore a black baseball hat adorned by a yellow logo with the letters L, M, Co and a black shirt with a picture on the front of it. Images of the man were not of a quality to reveal what was depicted on the front of his shirt. His face is covered by a white face mask in images of his front side.