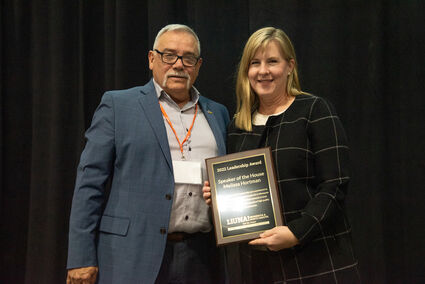 Two awards were presented to Rep. Zack Stephenson, DFL-Coon Rapids, and Sen. Bill Weber, R-Luverne, chief legislative authors who led efforts to pass the Natural Gas Innovation Act (NGIA) in the 2021 Legislative Session. As a result of NGIA, utilities can begin to invest in renewable natural gas, clean hydrogen, and carbon capture technologies, all of which give LIUNA members who work in gas distribution the chance to use their skills to implement innovative solutions and install new technologies that can reduce greenhouse gas emissions. Over 800 LIUNA members work for natural gas utilities, building and maintaining pipelines and distribution systems to provide safe, reliable service to 1.5 million Minnesotans.

Dan Olson, LIUNA International Representative and Local 1091 Business Manager from the Duluth-Superior area, emceed the program and said, "We hope that if you return to the Laborers Training Center in five or ten years, LIUNA apprentices will be helping install digesters and equip landfills for methane capture, or learning the difference between hydrogen and CO2 lines."

Due to scheduling conflicts, Senator Weber accepted his award virtually. In a video message, he emphasized Minnesota's diverse energy landscape and said, "We have to make sure we can get energy to the areas of Minnesota where it is needed. The efforts LIUNA members made over the years to construct our distribution system have been vital to all of us in Minnesota."

Representative Stephenson accepted both awards in person and lifted up the balanced approach of the Natural Gas Innovation Act, which earned the support of a wide coalition among environmental, business, and labor advocates. Rep. Stephenson said, "Minnesota is better equipped to transition towards a clean energy future with this law, and I hope to continue working with LIUNA on more innovative energy solutions."

House Speaker Melissa Hortman was recognized for her leadership and commitment to passing the largest construction jobs bill in Minnesota history during the 2020 Legislative Session. At the same time, the pandemic and economic free fall began, the building market became unpredictable, and Minnesota's construction workers needed the promise of future local jobs and projects.

Despite the critical timing and bipartisan support for a bonding bill, several summer months came and went without a construction jobs bill. Olson said, "Speaker Hortman was relentless. With bipartisan support from leaders like State Representatives Mary Murphy and Dean Urdahl and a willing partner in Senate Majority Leader Paul Gazelka, she led the effort to get the job done."

On October 14, 2020, the House passed the bill. The next day, the Senate followed. One week later, Governor Walz signed a $1.9 billion bonding bill, the largest construction jobs bill in Minnesota history.

In her acceptance remarks, Speaker Hortman said, "I may have passed the bill, but Mary Murphy wrote the bill, and she deserves the credit along with Senator Paul Gazelka, who I will miss working with very much. They were the other heroes in the story." 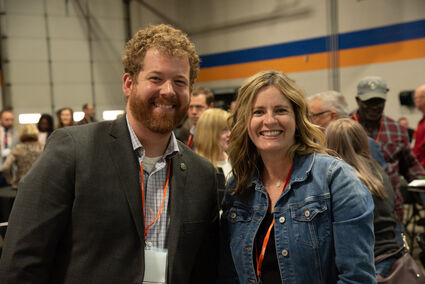 Combined with federal infrastructure investments, Laborers are able to look forward to years, if not a decade, of good careers with strong wages, that contribute to Laborers' health and welfare funds that serve 29,000 members and participants.