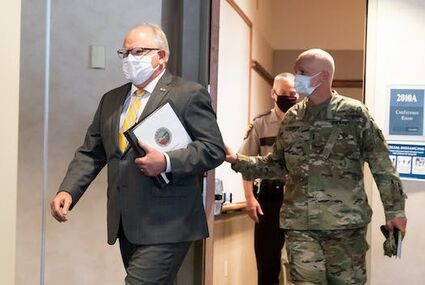 Gov. Tim Walz walked into a news conference about the unrest in the wake of George Floyd's killing in 2020, accompanied by Maj. Gen. Jon Jensen, adjutant general of the Minnesota National Guard.

Gov. Tim Walz's 24-year military career in the Minnesota National Guard is under attack by his GOP rival in the waning weeks of the governor's race.

At a recent state Capitol news conference, former state Sen. Scott Jensen stood with veterans to criticize Walz for leaving the guard in 2005, shortly before the battalion he led was deployed to Iraq. Walz has said he left the guard to run for Congress.

Jensen, who narrowly avoided the Vietnam-era draft, said the governor's departure from the guard fits a pattern and "is just one of a long line of instances ... where Tim Walz failed to lead and ran from his duty."