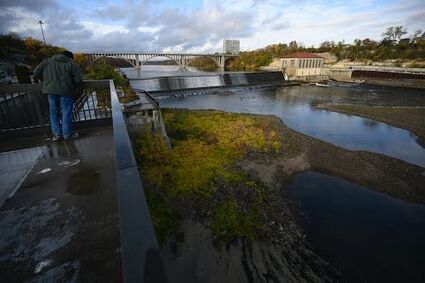 A view of Lock and Dam 1 on the Mississippi River from an observation area on Friday during an open house in Minneapolis.

Two Mississippi River locks and dams in the heart of the Twin Cities are the subject of a federal study to discern whether they might be closed, sold - or even removed entirely.

The U.S. Army Corps of Engineers kicked off its research this month into the Lower St. Anthony Falls Lock and Dam, in addition to Lock and Dam No. 1, also known as the Ford Dam, because the hydroelectric power generated there formerly powered the Ford plant in St. Paul.

The study will examine whether the Corps still has an interest in operating the structures, which see little commercial traffic after the closure of the Upper St. Anthony Falls Lock and Dam in 2015. In a similar study, the Corps decided to relinquish ownership at Upper St. Anthony, and a campaign is underway to redevelop the site to highlight Indigenous history and ecological restoration.