Trump's Official Response to Jan. 6 Subpoena Is as Unhinged as His Truth Social Posts 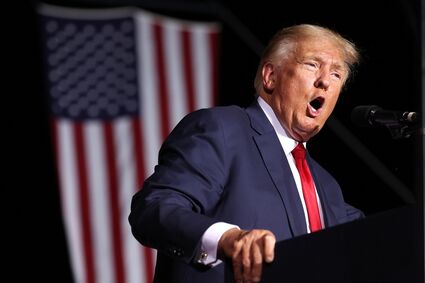 The Jan. 6 committee concluded its final hearing on Thursday by voting unanimously to subpoena Donald Trump, the man Vice Chair Liz Cheney described as the "central cause" of what happened that day. The former president responded with a furious Truth Social posting spree, calling the committee a "BUST" that is dividing the country while pinning the blame for the violence on House Speaker Nancy Pelosi (who, unlike Trump, spent the riot trying to marshall forces to stop it).

Trump followed up his rantings on Truth Social with even more rantings beneath his office's letterhead, sending a rambling, 14-page response to Chairman Bennie Thompson in which he does not indicate whether he will comply with the committee's forthcoming request for testimony and documents.

"Dear Chairman Thompson," the letter begins. "THE PRESIDENTIAL ELECTION OF 2020 WAS RIGGED AND STOLEN!"