Candidate Fair To Be Held at Red Lake Nation 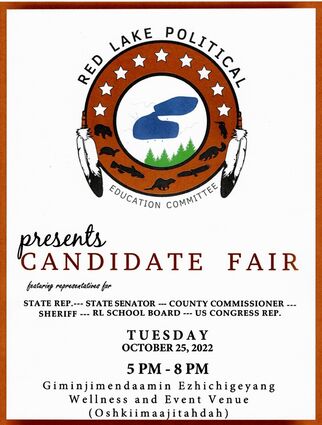 The Red Lake Political Education Committee (RLPEC), a tribal non-profit, and non-partisan organization, will be hosting a Candidate Fair on Tuesday, October 25, 2022, from 5:00 to 8:00 p.m. The Fair will be held at the Oshkiimaajitahdah (New Beginnings), 15525 Mendota Ave., Redby, MN. (five miles east of Red Lake on Highway #1, Entrance back of the building)

All candidates for local and statewide office, US Congress District 8, MN Senate District 2 and 2A, Beltrami County Sheriff, Beltrami County Commissioner District 4, and Red Lake School Board District 38, who would represent the Red Lake Indian Reservation have been invited. Red Lake Nation (Reservation) alone has over 2900 registered voters.

State Executive office of Governor, Lt. Governor, Attorney General, Secretary of State, and State Auditor are also on the ballot, but are unable to attend.

The event is informal and begins at 5 p.m. A light supper of chili and fry bread will be available at no cost or free-will donation for all attendees.

"We hope to draw both Indian and non-Indian participants from all of Beltrami County", said RLPEC Chair Michelle Paquin. "We expect local and tribal elected officials, political activists, and interested voters seeking information about candidates prior to the Minnesota general election on November 8, 2022. We expect this to be very informal and fun. 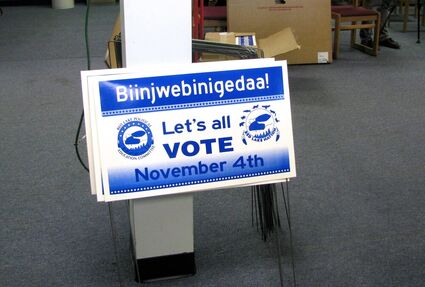 • To support and conduct nonpartisan research, education, and informational activities to increase public awareness about their right to vote and participate in elections.

• To increase voter participation in tribal, state, and federal elections within the membership of the Red Lake band of Chippewa Indians and;

• To increase voters knowledge of political and social issues.