A grieving mother described the 146-square-foot home as "an act of love." 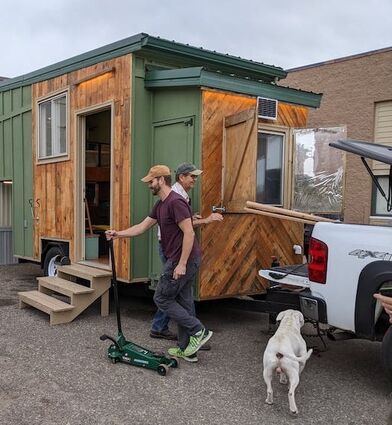 James MacKenzie, an electrician from Columbia Heights, helps unload a tiny home that he built for the homeless and donated to the American Indian Community Development Corp. in Minneapolis.

On the southern edge of downtown Minneapolis, between a busy highway ramp and a transit station, there sits a miniature version of the American Dream.

It's a home so tiny that it could fit into a standard parking space. It's roughly one-fifteenth the size of a typical Minnesota home, yet still has enough space for a sleeping bunk, kitchen sink, refrigerator, folding table with two barstools and a bathroom with shower. The building's roof is topped with enough solar panels to power the home and keep it warm through a Minnesota winter.

The dwelling stands as a monument to the determination and ingenuity of its creator - James MacKenzie, a journeyman electrician from Columbia Heights. MacKenzie was moved to act by the death of his childhood friend and the sight of Native Americans sleeping outside on city streets. Made largely of recycled materials, the home also serves as an emblematic answer to the state's affordable housing crisis and the growing numbers of people living on the streets or in emergency shelters.