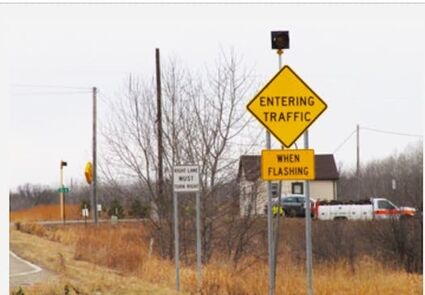 A dynamic warning system sign on Hwy. 200 at County Road 4 in Mahnomen County.

The Minnesota Department of Transportation has stopped installing a smart warning system at rural intersections that alerts drivers to oncoming traffic, despite recent research touting its effectiveness in reducing fatal and serious injury crashes.

The agency has opted to abandon the system, in which a beacon flashes on both the major and minor road when drivers approach an intersection. MnDOT is opting to use its federal dollars to put in more traffic signals, roundabouts and j-turns - intersections where drivers are forced to make a right turn, go down several hundred feet to an opening in the median and make a U-turn before returning to the original intersection to complete their movement.

"We were hoping they would work," MnDOT traffic engineer Derek Leuer said of the Rural Intersection Conflict Warning System (RICWS). "We could not find they significantly reduced crashes."