For Anishinaabe in Twin Ports, a piece of home is returned 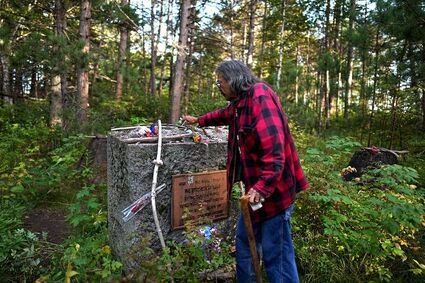 Once the site of a tribal village and cemetery on the western edge of Lake Superior, land on Wisconsin Point was recently transferred back to the Fond du Lac Band of Lake Superior Chippewa. Hundreds of bodies were removed to make way for industrial development in the early 1900s that never actually took place. Bob Miller recently visited the site and left an offering of tobacco. Miller is a descendent of Chief Osaugie, whose grave was one that was moved from Wisconsin Point to a Superior cemetery, along with nearly 200 others.

SUPERIOR, Wis. – Wild and lush Wisconsin Point, a forested sandbar that straddles Lake Superior and Allouez Bay, long has been treasured for swimming, smelting and hiking.

But for centuries, a thriving community of Anishinaabe lived there, long before and after the nearby Fond du Lac Reservation was established. And they were buried on the 3-mile peninsula until nearly 200 graves were exhumed to make way for a burgeoning steel industry in the early 1900s and villagers were forced to leave their homes.

But now, thanks to efforts by leaders of the Fond du Lac Band of Lake Superior Chippewa and an Indigenous member of the Superior City Council, sacred burial grounds are back under the ownership of the Lake Superior Chippewa, part of its systematic effort to reclaim its homelands. It aligns with a cultural shift developing nationally, as Indigenous land reclamation and stronger protection of Native American graves is a priority of the Biden administration.