New evidence to show Trump was warned of violence on Jan. 6 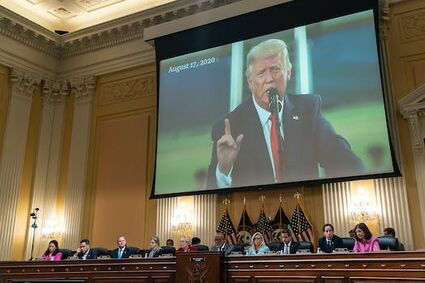 A video of former President Donald Trump is displayed on a screen during a House Select Committee to Investigate the Jan. 6 hearing in the Cannon House Office Building on June 13, 2022.

What will probably be the final public hearing of the House committee investigating the Jan. 6, 2021 attack on the U.S. Capitol is expected to highlight newly obtained Secret Service records showing how President Donald Trump was repeatedly alerted to brewing violence that day, and that he still sought to stoke the conflict, according to three people briefed on the records.

The committee plans to share in Thursday's hearing new video footage and internal Secret Service emails that appear to corroborate parts of the most startling inside accounts of that day, said the people briefed, who spoke on the condition of anonymity to discuss sensitive internal records. Former White House aide Cassidy Hutchinson testified in June that Trump was briefed on Jan. 6 that some of his supporters were armed for battle, demanded they be allowed into his rally and insisted on leading them on their march to the Capitol.

Surveillance footage the committee plans to share was taken near the Ellipse that morning before Trump's speech and shows throngs of his supporters clustered just outside the corralled area for his "Stop the Steal" rally. Secret Service officers screened those entering who sought to get closer to the stage. Law enforcement officials who were monitoring video that morning spotted Trump supporters with plastic shields, bulletproof vests and other paramilitary gear, and some in the Secret Service concluded they stayed outside the rally area to avoid having their weapons confiscated, according to people familiar with the new records.