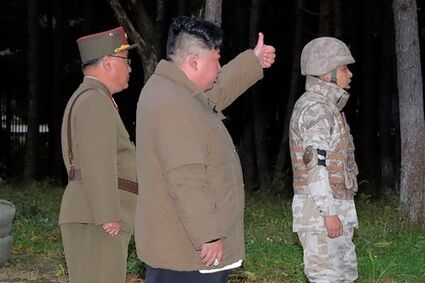 In this photo provided on Oct. 10, 2022, by the North Korean government, North Korean leader Kim Jong Un, center, inspects what it says a ballistic missile test held during Sept. 25 and Oct. 9, 2022 at an undisclosed location in North Korea.

Wednesday's tests extended a record number of weapons demonstrations this year by North Korea, which has punctuated its testing activity with threats to preemptively use nuclear weapons against South Korea and the United States if it perceives its leadership as under threat.

Analysts say Kim is exploiting the distraction created by Russia's war on Ukraine, using it as a window to accelerate arms development as he pursues a full-fledged nuclear arsenal that could viably threaten regional U.S. allies and the American homeland.