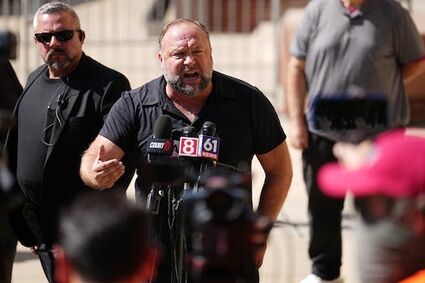 Infowars founder Alex Jones speaks to the media outside Waterbury Superior Court during his trial on Sept. 21, 2022, in Waterbury, Connecticut.

WATERBURY, Conn. - Jurors ordered conspiracy theorist Alex Jones on Wednesday to pay nearly $1 billion to Sandy Hook Elementary School shooting victims' relatives and an FBI agent, who said he turned their loss and trauma into years of torment by promoting the lie that the rampage was a hoax.

The $965 million verdict is the second big judgment against the Infowars host for spreading the myth that the deadliest school shooting in U.S. history never happened, and that the grieving families seen in news coverage were actors hired as part of a plot to take away people's guns.

The verdict came in a defamation lawsuit filed by some of the families of 26 people who were killed in the 2012 shooting, plus an FBI agent who was among the first responders. A Texas jury in August awarded nearly $50 million to the parents of another slain child.